Posted by Unknown on September 06, 2017
Asia's airports and growing in passenger numbers every year and most capital city airports such as the New Delhi, Jakarta and even the current upgrading works for the Phomn Penh airports are coming along very well. Advertisers in these airports are able to reach hard to get decision-makers flying for businesses between key cities such as Jakarta's Soekarno–Hatta International Airport to the Kuala Namu International Airport in Medan. Advertising in these airports will also help reach mid-to-high income segments that work in the capital cities such as Jakarta and travelers who fly between Siem Reap and Phnom Penh in Cambodia

Sometimes, I am so caught up int the business of airport advertising and I stop to LOOK LOOK - and then I see the incredible architectural beauty and grace of these South East Asian airports that combine unique, functionality, traditional and the ability to take in the overflow -

Jakarta's Soekarno–Hatta International Airport was designed as a "Airport within a Garden" or a "Garden within the Airport" The Javanese Joglo architecture departure terminal with garden enclosure within. It was designed by Paul Andreu , a French architect who also designed Paris–Charles de Gaulle Airport. One of the characteristics of this airport is the incorporation of the local architecture into the design , and the presence of tropical gardens between the waiting lounges. Like the picture above - typically, one will see many tropical garden fill the spaces between Javanese-styled pendopo (ie steeped ceilings) at the 42 waiting and boarding pavilions from Terminal 1 and Terminal 2 of Soekarno Hatta International Airport 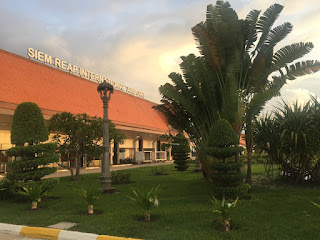 Siem Reap International Airport with a Pond, Garden and Bench meters away from the airplane boarding and landing areas 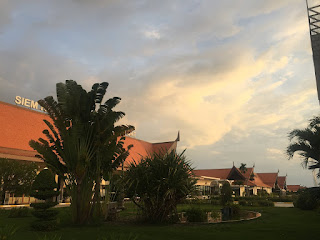 While I always thought the airports of Cambodia were created based on a hotel resort's blueprints, I was impressed by my visit at Siem Reap International Airport which was recently upgraded. Part of an overall extension scheme by the VINCI Airports for both the Siem Reap and Phomn Penh airports, it was aimed to bring up the overall passenger capacity of the 2 airports up to 10 million —almost twice what they could handle previously. This will enable them to meet the demands of rapidly growing passenger numbers in Cambodia (13% increase in 2015).

High ceilings, lots of sky wells, natural lighting but not overly hot with too much glass structures, the architectural design of the Siem Reap Airport is in their words "draws inspiration from Cambodian tradition, making it a showcase of local heritage, with its metal structure rising to a cathedral ceiling."

And yet another garden in the airport that I cannot sit in to enjoy. Back to the high speed air-con airport lounge for me!