Posted by April on April 06, 2014
Ten airports under development ahead of the ASEAN Open Skies Policy are unable to keep pace with the fast-growing number of air travelers, raising questions about their future capacity when the policy takes effect next year. 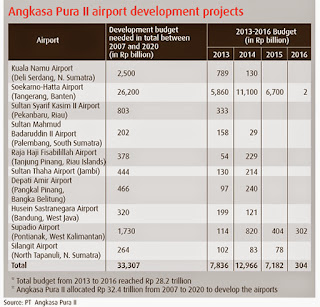 The ASEAN Open Skies Policy is expected to enhance air connectivity among ASEAN members, bringing down barriers to trade, easing the flow of labor and goods and boosting tourism.

Salahudin Rafi, operational and technical director of state-owned airport operator PT Angkasa Pura II, which manages major airports in the western part of Indonesia, said the airport development projects still could not handle the fast-paced annual growth in the number of passengers. “The increase in airport capacity in Indonesia is still significantly below the annual growth of the number of passengers,” he told The Jakarta Post recently. “Hence, airport infrastructure development must be accelerated to anticipate the drastic growth in passengers,” he added.

For example, Kuala Namu International Airport in Deli Serdang regency, North Sumatra — among the 10 airports undergoing development projects ahead of the Open Skies Policy — was initially built to accommodate 8 million passengers annually, according to Rafi. But the airport faced overcapacity in its first year of operation last year, when the number of passengers reached 8.4 million, he said. Likewise, the annual number of passengers of Soekarno-Hatta International Airport, Banten, reached 60.13 million last year, nearly three times the airport’s annual capacity of 22 million passengers. Soekarno-Hatta was the eighth busiest airport in the world in 2013. Salahudin said the operator was preparing for Kuala Namu’s second phase of development to further increase its capacity to 25 million passengers annually. “We’re hoping to start construction by next year,” he said.

Separately, Angkasa Pura II president director Tri Sunoko said the operator expected Soekarno-Hatta’s capacity would exceed the growth in passenger numbers by 2017, with the development of the third terminal and the renovation of the first and second terminals.

This year, Angkasa Pura II allocated Rp 12.966 trillion (US$1.14 billion) to improve facilities at the 10 airports through multi-year projects. Salahudin said the budget allocated to develop the 10 airports reached Rp 32.4 trillion between 2007 to 2020. According to Salahudin, up until last year, approximately Rp 6 trillion had been spent on developing the airports. “As for this year, we will initially allocate Rp 8.3 trillion to continue the development of the airports,” he said. “The fund will be raised from bank loans, including those from state-owned banks,” he added.
Airport Advertising Indonesia Outdoor Advertising