Posted by Unknown on December 12, 2018
It has come to my attention like too many years later - that the Emmy Winning Drama Series - Mad Men set in the vintage 1960's where advertising execs are mavericks and spinners of marketing gems that ignites the awakening aspirations of consumers in America.

“Happiness is a billboard on the side of the road that screams with reassurance that whatever you’re doing is OK.”

Pictures taken from the the Daily Billboard. 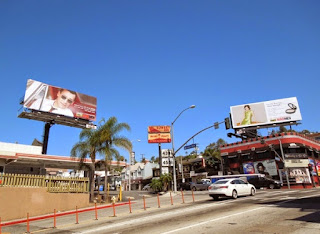 The billboards placement of the Mad Men characters of Don Draper, Betty, Pete and Peggy are well positioned to dominate the major cross junctions as they offer themselves "in consideration" of the upcoming Emmys in LA 2014.
effective uses of outdoor Good Billboard Checklist Outdoor Advertising Targeted Marketing USA