In a blink of an eye, we are already passing the half year mark of 2013. 2012 was an exciting and fun year not only for us in Singapore, but also the millions of travelers that are flying in and out of Jakarta.

Our statistics in 2010 shows that Jakarta Airport (Soekarno-Hatta International Airport) was ranked in 15th for the world’s busiest airport. As of year 2012, they have climbed and claimed the 9th position, securing a place in the top 10 busiest airports of the world.

Serving 43.7 million passengers in year 2010, this number rise at a rapid speed when we saw the number of passengers grew to an amazing 57.8 million in year 2012. This was a 32.6% growth in just 2 years. Flying 175 flights weekly, Garuda Indonesia has the highest frequency for international flights in the airport. In terms of domestic flights, Lion Airlines are flying a whooping figure of 1,100 flights weekly to cater for the needs of the travelers.

Perhaps with the commencement of the Batik Airlines which is the subsidiary of Lion Air, we will see even more flight activities in the near future. Afterall, Lion Air placed a record breaking order for 234 A320 jets with Airbus in early 2013 - this had surpassed the previous record by Boeing ($22.4 Billion).


Plans to expand the Soekarno-Hatta International Airport are ongoing and would be expected to be completed in year 2014, increasing the airport capacity to serve 62 million passengers per annum. In early 2014, SkyTeam will welcome Garuda Indonesia as their second airline in Southeast Asia to join after Vietnam air. This will open up a bigger market to Indonesia and we will be expected to see another spike in passenger number next year. Asiana Airlines has also just commenced flight operations in July 2013. Asiaana is the second Korean airline serving Indonesia, after Korean Air, which has for years served Jakarta and Denpasar. 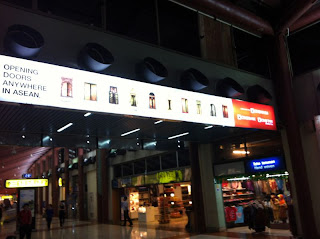 Long term advertisers such as CIMB had certainly benefited from the increased exposure to a growing passenger volume for their advertising at the Soekarno-Hatta International Airport. CIMB had been advertising since 2009, do read more about it here
Airport Advertising Indonesia TPM Team