The Olympics 2012 came to a close a couple of hours ago with a big bang -  as Monty Python Eric Idle's "Always Look On The Bright Side Of Life" performance ended with some stuntpeople getting launched out of a cannon. The Olympics 2012 was certainly something great to remember for all and then some. Dow Chemical was also well-remembered for their media coup with a well placed giant billboard that garnered them extra media attention and forced BBC cameramen scrambling to correct their little blooper.

Taken from the Guradian UK, the full article is found here 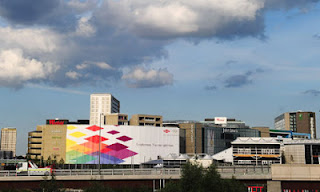 Dow Chemical has paid more than £1m for a giant billboard, the approximate size of two tennis courts, to wrap around part of Westfield for a 12-week period covering the Olympic and Paralympic Games.


The billboard was visible during the Opening Ceremony Countdown before Boyle's opening ceremony from 7pm to 9pm on Friday 27 July. The show drew a peak five-minute audience of almost 19 million and had an average of just over 10 million on BBC1.


It was also visible during the first Olympic Breakfast programme from 6am to 9am on BBC1 on Saturday 28 August, fronted by Sian Williams and Chris Hollins, which drew a peak audience of almost 3 million viewers and an average of 1.8 million.


One media buying executive said that appearing in the live coverage of such a globally important event could have been worth anything up to the equivalent of spending £2m on TV advertising.

And because Monty Python is so universal and it is back to reality on a Monday morning with a full week's load of work, I think we ALL deserve this:


"Cheer up, Brian. You know what they say. Some things in life are bad they can really make you mad Other things just make you swear and curse When you're chewin' on life's gristle, don't grumble give a whistle And this'll help things turn out for the best..."
Billboards Creative Europe Outdoor Advertising Targeted Marketing

Dharyl Strikes said…
Well for me too much adds is somekind of informality. We all know adds are what keep them living but I guess they sometimes need to keep in on the line and not be so abusive.

Unknown said…
Hey Guys, I has read your Blog and i agree with your Outdoor Advertising views. So, I would like to give you thanks for sharing superb information. if you want more info please, Visit: www.signrider.com.au
October 11, 2012 at 6:29 PM