Posted by April on March 30, 2011
An advertising billboard outside a DSquared store (an Italian high-end fashion label store) in Sanlitun North Village, a new centre of luxury brands in Central Beijing. 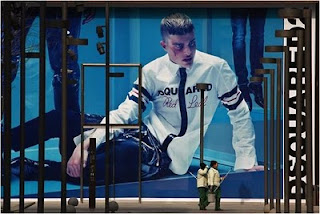 Nothing like a billboard in a high traffic area to shout out in your audience's face. It is good news and bad news for outdoor media owners. But now we all know - Out of Home media works! And bigger the better.

The Beijing Administration for Industry and Commerce said in a recent statement that businesses were given an April 15 deadline to rectify such ads, along with any that excessively promote “foreign” things.

It gave no details on which “foreign” things were considered objectionable. Such promotions help create a politically “unhealthy” climate, it said. Violators could face fines of up to 30,000 yuan (S$5,800), the state-run China Daily said yesterday.

Newly forbidden words include “supreme”, “royal”, “luxury” or “high class”, which are widely used in Chinese promotions for houses, vehicles and wines, it said.

The authorities in the south-western mega-city of Chongqing last week issued similar rules that barred real estate advertisements from using phrases including “best”, “unique” or “irreplaceable”.

Chinese officials are struggling to cool criticisms over a widening income gap at a time when high inflation has put economic pressure on the country’s hundreds of millions of low-income farmers and industrial workers.

Premier Wen Jiabao said earlier this month that “resolving unfair income distribution” would be a major objective under a 2011-2015 state economic plan.

Brokerage firm CLSA Asia-Pacific Markets predicted in January that China would become the world’s largest luxury goods market by 2020; accounting for 44 per cent of worldwide sales and bigger than the entire global market is now.