What Is Augmented Reality?

Posted by April on April 11, 2010
A recent article by the TODAY newspaper identified augmented reality (AR) as the “New Look at Reality”. AR is the “process of layering information and visuals over the real world” or more detailedly defined by Wikipedia as the term for a live direct or indirect view of a physical real-world environment whose elements are augmented by virtual computer-generated imagery. 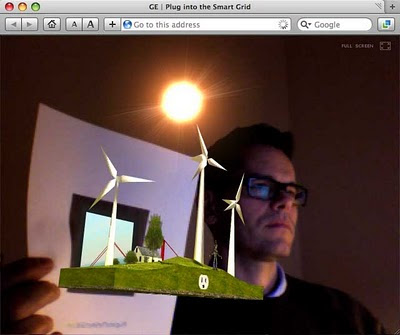 Mr Shen Heng, a developer of commercial users of AR in Singapore, was interviewed in the TODAY newspaper article. To quote Shen in the article:

“You might soon see a lot more commercial uses of AR here. Mr Shen W Heng, creative director of local interactive design firm H1Studio gets up to three enquiries a month on AR-based applications from companies. His firm is developing a website for Samsung that will employ AR to promote the launch of its 3D television sets. “Companies like using augmented reality because it can put the product in the hands of users virtually,” said Mr Heng.”

AR is not confined to smartphones with GPS and digital compasses, it is also enabled in the desktop computer as well. I think AR is the convergence platform for mobile apps, real time information and digital Out-of-Home (dOOH). Its marketing application possibilities are endless! To quote the the TODAY newspaper article (again):

Google’s visual search mobile application for the Android platform called Google Goggles already lets you search simply by taking a picture of a namecard or information on a product like a book. But in the future, it might let you “Google” the real world as you see it.

Said a Google spokesperson: “Let’s say you’re walking down the street, using an augmented reality app, like Google Goggles, on your mobile phone to see what’s interesting around you. Through your phone’s camera, you see a billboard for a great product — basketball shoes. Using image recognition, the app could recognise that it’s a billboard for a particular shoe brand, let you choose to watch a video of one of its shoes in action, show an expandable ad for that brand, display all the nearest stores on an accompanying map, and include a way for you to order a shoe and pick it up on your way home from work.”

Coupled with the power of social networks, I am looking forward to the launch of the new AR related killer app soon.