Billboards in The Internet Age = YES!

Posted by April on February 26, 2010
Referred by Jim Ritterhouse of AZ Billboard, I was amused, aghast and highly validated (in my support for outdoor advertising) by the impact this ONE billboard in rural Minnesota. It features the “former President George W. Bush with the words: "Miss Me Yet?" – Article by The Christian Science Monitor here, by Laurent Belsie / February 9, 2010 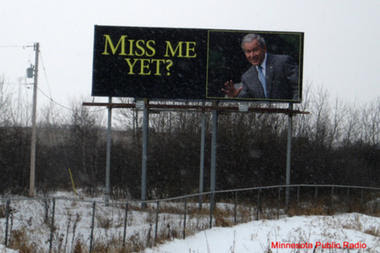 Apparently this ONE billboard “was one of the most-searched items on Google Tuesday, generating news articles and attention that most advertisers could only dream of.” But let’s focus less of the reasons behind such content, but more on the editor’s question of the decade: “In the TV-Internet battle for eyeballs, will billboards emerge as a big winner?”

Laurent Belsie noted that the effects and PR generated by this single billboard are “a clear indication of how vibrant outdoor advertising can become, even in an Internet age.”

"[Outdoor advertising] are arguably more relevant than they ever were," says Dave Etherington, worldwide marketing director for Titan,which handles advertising on transit systems around the US. "A key thing about a billboard or a large ad ... it has the power to stop you in your stride that comes from the incongruity of seeing something in a public space where you're not conditioned to expect something."

Rightly so! TPM Outdoor manage a number of outdoor sites in Singapore and Indonesia. We did a special execution of Mobile Billboard in Singapore. This was part of the marketing mix for “The Best Job In The World” campaign by Queensland Tourism in Singapore Jan 2009. Even though this overall campaign was online and PR events driven, outdoor advertising was relevant in midst of all these new media. Thus “even as digital media grow online, there is still a strong need for balance in some form of offline advertising in the outdoor context…” Read more here