UEFA 2016 and Out of Home Advertising

Posted by Unknown on June 13, 2016
The 2016 UEFA European Championship, commonly referred to as UEFA Euro 2016 or simply Euro 2016 kicked off over the weekend starting from June 10th till July 10th 2016. It has been quite a dramatic weekend so far. Based on South East Asia's fans preference for international football focused on World Cup and BPL, we will probably hear more of EURO 2016 near us closer to the finals! 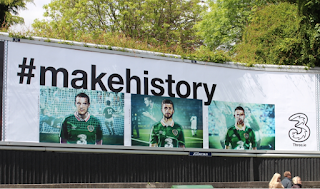 Three Ireland are the sponsors of the Republic of Ireland Football team and their Outdoor promotion has been running on large formats, including, Golden Squares, 48 and 96 Sheets, plus Première sites in advance of Euro 2016! Ever the pioneer in pushing the boundaries of OOH - from the JCDecaux website


"JCDecaux has teamed up with PA, (the Press Association), to bring UEFA Euro 2016 live scores and news coverage to consumers nationwide, powered by live data and delivered dynamically."

What a way to get Euro 2016 live everywhere you go!

Contact us today to see how your media campaign can work for you.
Call 6273 0556 or reach us at ask@tpmoutdoor.com