Out of Home Advertising is the Future

Posted by Unknown on May 17, 2016
This year marks my tenth year in Out of Home Advertising – actually, I have in the world of Out of Home advertising way before then, but that's another story. In the words of Nadja Lossgott from her article on DandAD - The Future of Outdoor Advertising


‘Outdoor’ often feels like both advertising’s past and its future. You can’t accuse outdoor of being reluctant to change. A quick look at the Outdoor award categories gives you a clue. There’s ambient, ambient digital screens, interactive outdoor experiences, live events, non-formatted digital outdoor, special builds. The list goes on.

Out of Home Advertising never gave me a day’s of rest in its ever changing application and adaptation to all the ways communications have transformed in the last 10 years. From the static billboards to the mechanical trivisions, scrolling lightboxes, creative executions and ambient immersive Out of Home and then from the digital small screens to the giant and infinite LED screens spanning building walls. It is also more than a format but also an experience – experience of a welcome lounge – and HECK, some billboards can even serve you a soda (beer for me please). Here’s one that kills mosquitos and here’s another that does social good by collecting and purifying water from deserts. But we did not convert them all.


The intrusive, inflexibile and mute billboards. They feel like throwbacks to the old way of doing things. A flat image with an unyielding rule that the consumer can take in no more than eight words (unless they’re Economist readers). How boring. How old school. Until you remember 2015's ‘Shot on iPhone 6’ campaign. Simple, traditional and utterly un-missable pieces of art in the urban landscape.

In this same year, the iPhone campaign also took the Cannes Lion Grand Prix for Out of Home advertising for its campaign to use billboards to feature users' iPhone 6 photos.


It proves our past can be our friend too. There is a piece of research that has always stayed with me. In focus groups people will remember seeing a brand’s new television ad, even though no such ad has been on air. It turns out that what people are recalling is the billboards they pass each and every day. People don’t forget billboards. Although they sometimes mislable them. They might not be shiny, they might not be new, but billboards are real workhorses. We shouldn’t dismiss them. The other good thing about billboards is you can’t adblock the view.

In fact Out-of-Home advertising is growing.

It is one of the only adspend sectors which has not been cannibalized by digital advertising. In fact in Adage's most recent article, “Technology Fuels Renaissance in Out-of-Home Advertising” it was well noted by Magna Global that


Out-of-home advertising was the only traditional media business to grow last year, Magna Global said in its ad revenue forecast last December, citing "the superior yield brought in by digital panels as well as better measurement and trading metrics allowing OOH and cinema to tap into branding budgets and TV budgets.

" Spending on out-of-home ads in the U.S. grew to $7.3 billion last year from $7 billion in 2014, according to the forecast, which groups cinema and outdoor advertising together. The sector still accounts for only a modest share of total ad spending, 4.3%, compared with 35.3% for digital. But outdoor is forecast to hold about that same share through 2019. By contrast, the share for newspaper print ad spending is expected to fall to 4.2% in 2019 from 8.4% today while magazine ad pages drop to 5.3% from 9.2%, according to Magna Global. (Online ads bought on newspaper and magazine sites are grouped in digital.)

Out-of-home advertising is drawing a steady stream of marketing dollars even as other forms of traditional advertising lose ground to digital. It doesn't hurt that consumers are encountering more signs and out-of-home video while online ads and TV commercials get easier to avoid.

Out-of-home advertising is works as long as there is need for humans to travel and GET OUT OF HOME whether is it for work, live, play!

More and more E-commerce businesses are using Out of Home Advertising – and why not?

Considering that a huge and growing number of audience now consume news, entertainment, make decisions, purchase via digital channels – for news it is either via the e-version of the local newspapers or even from the NYT or Huffington Post. The truth is that most of any news you really need to know is on your best friend’s Facebook feed or curated by your favorite media maven on their Twitter feed. Buying takes place in the online world via a trusted platform or via a C2C platform for exchanges. But once the consumer is hooked on a certain digital platform the stickiness to switch e-platforms is high unless there was a shift in the quality of experience. You know – when you prefer to use Taobao to Amazon or the higher tendency to prefer to read from Huffington or The Guardian online or what was that? So as competition amongst e-commerce and digital businesses grow, Out-of-home advertising is one of the key thrust to switch users and get the USP known to new audiences and reinforce what the current users already know and value the e-commerce product. And as said, Out-of-home advertising cannot be adblocked or skipped.

One of TPM’s eCommerce client using our airport media in the Soekarno Hatta International Airport, Departure, in the Jakarta airport for advertising is Traveloka in their on-going 2016 outreach campaign 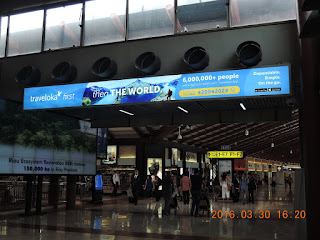 
Ivan Pollard, senior VP-strategic marketing at Coca-Cola North America. But when Coke makes targeted plays in outdoor -- like publishing a consumer tweet about a brand -- it ensures that the "personal story is one that resonates with everybody," he said, because outdoor remains a one-to-many medium. 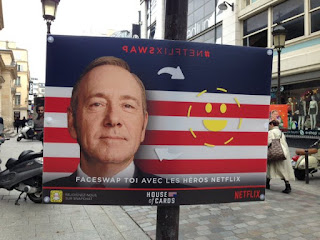 it was an “interesting, offline-social combination” that …”allowed latest out-of-home campaign lets Snapchat users in France swap faces with its TV characters including House of Cards' Frank Underwood and the namesake of Unbreakable Kimmy Schmidt. Bringing outdoor ads together with Snapchat seems to be a growing phenomenon, with the mobile app itself leading the way. In late March, Snapchat debuted smart, stealthy roadside ads in several cities. And last week, it bought a huge, digital ad on a Times Square billboard”

So where have online-offline marketing came together for your brand in your current campaign?

What better way to have for your audience to have fun with your brand?

Contact us today to plan your media campaign.
Call 6273 0556 or reach us at ask@tpmoutdoor.com