Posted by Unknown on April 25, 2015
Taken off Nigel Hembrow's share of an article from LiveMint - How Housing.com grabbed eyeballs 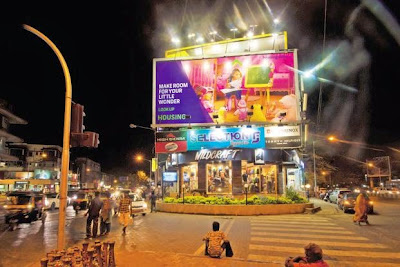 For better details go on directly to the article here. I loosely paraphrase the article as follow:

For Housing.com - an online real estate website operated by Mumbai-based Locon Solutions Pvt. Ltd. undertook an advertising campaign in print, digital and outdoor... the company reached threshold visibility through billboards...in seven cities, including the metros. Threshold visibility simply means visibility that spans platforms (despite the ad largely being on one or two platforms).

It is kind of a tipping point which packaged goods brands try and reach when they buy spots on television. Housing inundated one medium quite smartly and achieved that threshold. The creative execution of the campaign was done in-house struck a chord because it told a likeable story of the life journey of a young couple via a static medium (print and billboards) rather than through the audio-visual medium. It was a story in motion in a static medium: “People capture a moment in such ads. We were stringing together moments to create the story which moved forward,” he says, explaining why people felt they had seen a TV commercial. The campaign features a young couple sharing a pizza, with unopened cartons in the background. In the next ad, they are seen looking for a house. A third shows an expectant mother. A fourth shows a young child playing in her own room. On billboards, the ad changed every seven days as the story moved forward, although 25% of the billboards retained the older ad to retain continuity. [On an analytic level...]

Housing pulled off with outdoor what other e-commerce brands are attempting to achieve with expensive brand ambassadors and associations with valuable sporting properties such as the Indian Premier League.

The media and entertainment industry report released by the Federation of Indian Chambers of Commerce and Industry and KPMG last month noted a significant surge in spends by e-commerce companies, which are said to have spent between Rs.750 crore and Rs.1,000 crore (USD 150,000) on advertising across media. Like most venture capital and private equity firm-backed e-commerce companies, Housing, too, is burning cash in marketing, and a large part of the Rs.50-80 crore advertising budget it had set aside for phase 1 of such efforts was moved to billboards when the company saw a huge jump in traffic after the launch of its out-of-home campaign.


For better details go on directly to the article here.

Outdoor advertising works for e-Commerce brands targeting a highly mobile and educated audience that do not consume mainstream media such as news print and TV on a regular basis, preferring to pursue and choose their own content thus making them hard to reach. Outdoor advertising reaches everyone at the targeted location.
Ambient Ads Creative Good Billboard Checklist India Outdoor Advertising Street

The billboard message is strong, bold and says TRUTH. It is hard to get away with murky information when the billboard is anchored at the busiest cross junction in downtown New York City or anywhere in the world. That's the power and impact of using billboard advertising.


There is no other more important time than now for the New York Times to take on this campaign. Well worded by Adweek -
In a world of fake news and alternative facts, The New York Times is asserting the primacy and importance of the truth—and the role independent journalists play in searching for it, and telling it—in a big new brand campaign…

It has come to my attention like too many years later - that the Emmy Winning Drama Series - Mad Men set in the vintage 1960's where advertising execs are mavericks and spinners of marketing gems that ignites the awakening aspirations of consumers in America.

“Happiness is a billboard on the side of the road that screams with reassurance that whatever you’re doing is OK.” Pictures taken from the the Daily Billboard.


The billboards placement of the Mad Men characters of Don Draper, Betty, Pete and Peggy are well positioned to dominate the major cross junctions as they offer themselves "in consideration" of the upcoming Emmys in LA 2014.

The first reaction when I heard about this technology was "No, it is too dangerous, the risk of breakdown and incidents will outweigh the benefits of this media... the mall owner will not allow it" - All these thoughts have been dismissed since the launch of Msquare Ad Roller India in India by Lokesh Kumar and Director of Maverick Media.

In fact this media provides BOTH a captive audience on the escalator and has the audience's undivided attention, as holding on to the railing is required for safety.


This impactful media provides a myriad of design possibilities and content that are can be both engaging or contextually hunourous even though it is just on minimum 7 sq. m., 60 m. Ad-roller has shared the statistics of catching undivided attention of consumers for up to 40 seconds, which results in ~78% brand recall.

This article by media4growth shares insights from the founders and product principal. One key note from the article quoted below:
this media is colourfast, sc…