Posted by April on February 13, 2014
Taking a direct newsjack from Oddity Central, I did not want to paraphrase to lose the content of such an interesting new innovation. I guess, necessity is the mother of all invention and I am sure this is a certain luxury especially from motorcycle fans.

Apparently known as ‘Wheelies’, these are the the latest accessories for motorcycles, developed by World Moto, a Bangkok-based tech company. This invention was launched during the Sign Asia Expo in 2013. This World Moto invention allows bikers to convert a bike’s front wheels into full color LED screens – displaying mobile billboards, videos, animation or text of their choice. What’s great about Wheelies is that the display is stationary even when the wheels are in motion. 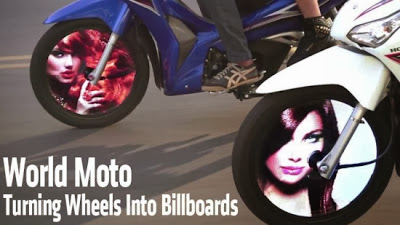 The invention is centred on the use of persistence vision – the illusion of motion generated by static images moving at high speeds. In layman terms, this means that the images are actually rotating with the wheels, but appear to be static. Each Wheelie has 424 LED lights mounted on an eight spoke wheel. A computer tracks the wheel’s speed and the position of each spoke, and controls the lighting of the LEDs. 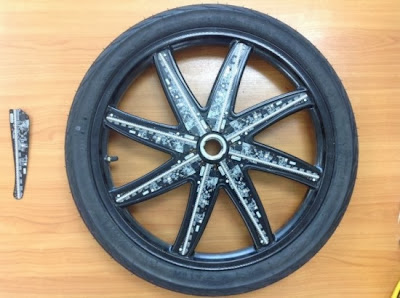 Certainly a revenue generator possibility for Out-of-Home media owners. And a great way for motorcycle owners to impress their hot girlfriends. This girl here is certainly impressed. 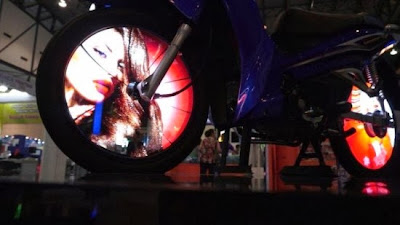 When will it be launched for commercial use?
Spotted: Oddity Central 2014
Creative Digital Outdoor Research