Posted by April on August 22, 2013
Along the same lines of getting increasingly jaded, I learned a new word today - Wild Postings, or as Wikipedia - it also known as flyposting - [is a guerrilla marketing tactic through the act of placing advertising posters or flyers in legal or illegal places....] 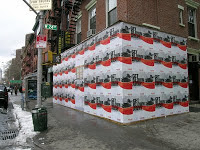 [In the United States, these posters are also commonly referred to as wheatpaste posters because wheatpaste is often used to adhere the posters. Posters are adhered to construction site barricades, building façades and in alleyways]

I remember Apple iPod did a series of these worldwide in 2004. I now know the terminology for it.