2011 must be the year of “royal weddings” – In England between Prince William and Miss Catherine Middleton, and in Bhutan between King Jigme Khesar and Miss Jetsun Pema. Something as splendid but slightly less world riveting is the 4-day Indonesian royal wedding in Yogyakarta between Gusti Kanjeng Ratu Bendara and Kanjeng Pengeran Haryo Yudhanegara. It was a very grand affair which was rich in royal Javanese traditions and culture.


The Indonesian society is less homogenous than it seems. Indonesia is a unique country and has influences from a multitude of religions, including Hinduism, Buddhism, Confucianism and Islam, from hundreds of years ago. (Wiki)

In fact, Indonesia is an archipelago of 13,466 island and 33 provinces. With over 238 million people, it is the world's fourth most populous country. Its largest city is its capital, Jakarta with more than 9.5 million populations. Other major cities include: Surabaya (2.7 mil), Bandung (2.4 mil), Medan (2.1 mil) and Palembang (1.5 mil) 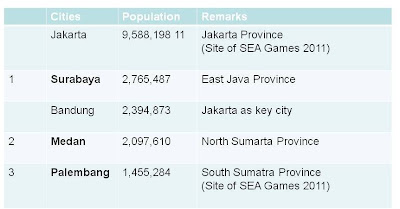 Given that Indonesia’s geographical spread, air travel is an essential transportation mode. Indonesia’s capital airport in Jakarta - The Soekarno-Hatta International Airport is packed with millions of travelers each year. In 2010, Soekarno-Hatta was ranked 16th amongst the world's busiest airports by passenger traffic (5th busiest in Asia), there are now over 40 million passengers travelling in this airport every year and it’s still growing!

Indonesia is much more than it seems.
Airport Advertising Indonesia TPM Team