Posted by April on April 11, 2011
Traffic violation of an errant vehicle posted on an LED screen above Nanjing’s main thoroughfair

Beijing: A Chinese city has come up with a new way to curb traffic violations.
Early this month, the traffic management authorities in Nanjing set up 52 large LED display screens along busy roads to post text messages showing the license plate numbers of offenders.

The messages also show where and how the drivers violate traffic regulations, said Mr. He Yingwei, an official with the Nanjing Traffic Management Bureau. 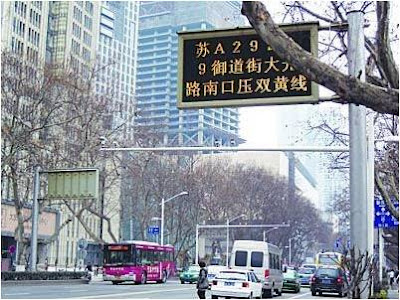 The text messages are posted soon after the offenders are caught on film by any one of the 400 or so cameras situated along major roads in Nanjing.

“We hope the exposure of behavior that might cause traffic jams can deter and educate careless drivers and ensure an orderly, safe and smooth traffic flow,” Mr. He said.

Mr. Lu Jianfeng, a lawyer in Nanjing, said that with the new practice, drivers would be alerted immediately after they breach traffic rules.“In the past, I was not informed of my mistakes until the annual vehicle check,” he said.

However, Mr. Chen Yong, another Nanjing resident, thought it was not easy to spot the screens.

Some drivers also said they would feel uncomfortable if private information, such as their license plate numbers, was made public.

Besides Nanjing, traffic congestion has become a headache for many other cities in China, which is now the world’s largest car market.
China Digital Outdoor LED Regulations