Posted by April on October 11, 2010
Taken from Singapore's Transportation Secrets by Christopher Tan at citiscope.org, I'll pick up some excerpts that gives some insights to our country's vehicle traffic numbers and how this can improve our traffic count capabilities:

More and more people are moving - all the time.
30 years ago, Singaporeans made 2.7 million daily trips. Now it's more than 11 million -in cars, buses and trains.

The current balance in Singapore's average daily trips of 11 million (6 million by private transport, 3 million by bus and 2 million by rail) is likely to shift significantly toward public transit. This is mostly attributed to a major added investment -- $40 billion in Singapore dollars (U.S. $28.4 billion) -- being committed to expanding rail lines to 280 km by 2020. 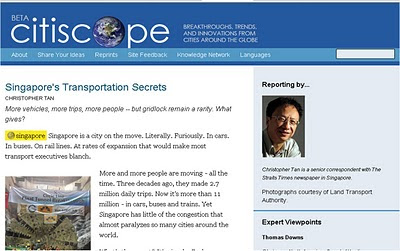 Size of the City v its Vehiclar Population
Singapore is just 710 sq km - a bit bigger than New York City. It has 5 million people - more than double its population 30 years ago. Now, close to 1 million vehicles (of which 40,000 are from across the Malaysian border) zip around in a network of well-paved roads spanning 3,400 km.


Road pricing measures
Singapore has tthe Electronic Road Pricing (ERP) system - As a car passes any of the city's 69 gantries (electronic checkpoints), the card reader charges a fee, which varies significantly depending on time of day. For someone driving into the city during the morning rush hour, tolls across multiple gantries often add up to S$10 a day.


Car ownership premium
COE - Certificate of Entitlement is auction twice a month. Its price today hovers around S$20,000 in Singapore dollars, but it has been as high as S$110,000. On top of that, Singapore motorists pay 44 cents in duty for every liter of fuel they use (roughly $1.75 a gallon in the U.S.)


The future of Singapore's transportation system
Transport Minister Raymond Lim has an ambitious goal: to increase the percentage of public transit trips during morning rush hours from 59% in 2008 to 70% in the next 10years. To do this, he acknowledges that public transport has to be as convenient and nearly as speedy as driving.
Research Singapore