Posted by April on October 04, 2010
We have updated the passenger statistics at the Jakarta Airport (Soekarno-Hatta) Indonesia with official figures from the Airport Authorities recently. 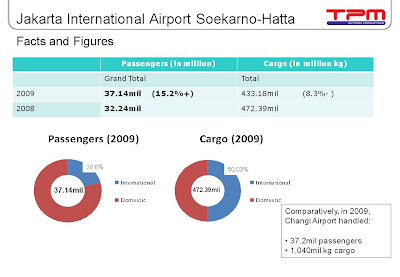 As of June in 2010, Jakarta Airport (Soekarno-Hatta) is now the 15th busiest Airport of the World. And with my frequent flyer's status to a single country - I can vouch for this statistic as the queues have I have experienced have more than doubled over the last couple of months. More statistic from Wiki

The growth in Indonesia is gaining strong momentum and the Bank of Indonesia (BI) has just raised its GDP growth forecast to 5.7% from 4.8% as seen in a Jakarta Post article on 2010, Sept 3. It certainly seems that Indonesia is now the new "I" or the additional "I" in the sought after emerging powerhouses of BRICs (Brazil, Russia, India and China).

Is your brand seen at the right place in this nation of 227mil?
Airport Advertising Indonesia Research