Posted by April on August 18, 2008
The technology used behind the Beijing Olympics Opening Ceremony is quite something. So much so that I am holding my breath for the Closing Ceremony ;) There are so much more brilliant pictures from Gizmodo. 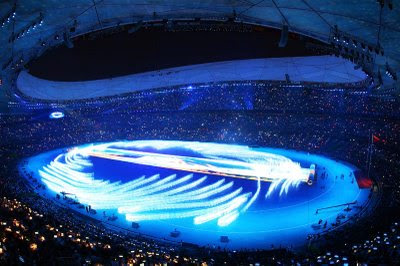 I personally liked one part where the performers were wearing full suits of LED lights and changing colours throughout the dance formation... I want one of those caps. 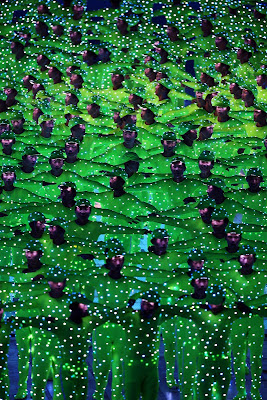 Gizmodo also provides a glimpse into the technology used behind the ceremonies; some highlights incl. [extracted from Gizmodo]

• The LED screen at the center of the ground, which unrolled to represent a huge scroll detailing China's 5,000-year civilization, measured 482 feet by 72 feet wide and contained a whopping 44,000 LED beads with a distance of 600 millimeters between each two.

• The material used for the paper on the painting scroll was produced by the country's aerospace sector. Similarly, most of the core technologies used in the ceremony had been developed by domestic companies.

Even our own TPM team had a bit of sparring wondering if it was really a LED screen ("Wa - are you sure it can be so big? vs "But no shadow!") and now we see what's the finale going to be like this Sunday. *glee
China Creative Digital Outdoor LED Lighting Research