Dimly-lit Flyer Does Not Quite Take Off...

Posted by April on March 31, 2008
Bright and well designed lighting is extremely vital to portray a city's vibrancy. Thus the city skyline not only includes the buildings but also billboard displays and iconic features such as a ferris wheel. Did the ferris wheel trend all started with the Millennium Eye in London?

8 years later, Singapore has one too - The Singapore Flyer! It had its soft launch on Valentine's Day, mid Feb 2008 and has been operating since. But its effect on the overall city skyline seems to be lacking... Mr Lim Boon Hee commented on this via TODAY newspaper on 26 Mar 2008. His comments as follow: 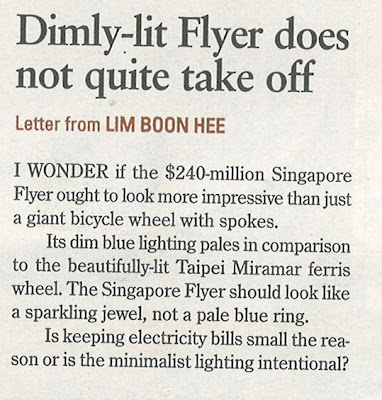 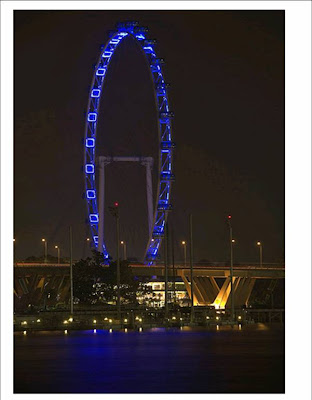 As the above picture shows, Mr Lim is quite right, as the Singapore Flyer is currently lit in an electric blue shade with white neon animated in square sections along the wheel. And Rhonda Koh from the Singapore Flyer has replied on the WEEKEND TODAY to confirm that this blue hue is intentional and the dynamic lighting effects will be unveiled in the Grand Opening on April 15.

In my personal view, not only must the lighting effects be more dynamic, they must be a lot more brighter as well for a good impact. But I am also very curious to why the "spokes" of the wheel are not lit, giving the strange effect of a giant RING? Fengshui?? 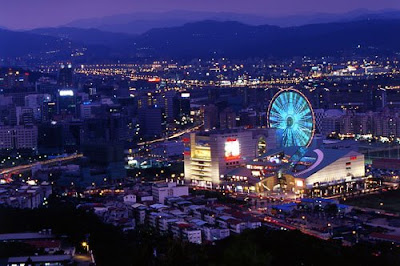 Here's the Taipei Miramar Wheel and the nightscape view of Taipei. Hopefully the formal lighting plan for the Singapore Flyer will have the same impact on our own Singapore skyline. Till 15 April 2008 then. Mr Lim, myself and a whole load of us are looking forward to the unveiling...!
Lighting Outdoor Advertising Singapore