Life's Short. Get a Divorce. 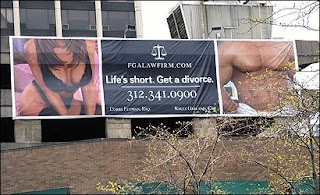 "Life's Short. Get a Divorce. " - Best life-advice eh? Especially, after I tell you that this is from a pair of divorce lawyers Corri Fetman and Kelly Garland!

Display in downtown Chicago, USA, this suggestive billboard advertisement was removed after only less than a week of display. It features the partially clothed torsos of a buff man and a provocative woman with a slogan in between - “Life’s short. Get a divorce.”

It might be a tad offensive to some, but this was not the reason that it was pulled down by city workers. Instead, it was because Fetman did not have the proper permit. As City Alderman Burton Natarus said. "It has nothing to do with content or anything else." (For more...)