Posted by April on May 12, 2007
JVC Mobile Unveils an Exciting Times Square Billboard That Will Stop Traffic. 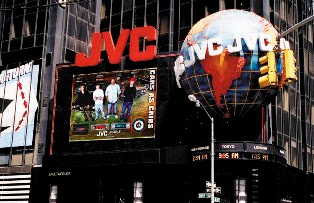 There is something very familiar about this execution, especially on the GLOBE. This latest billboard on Times Square, New York is a 2-part execution by Spectacolor Communications Inc - a traffic-stopper billboard graced by eight-foot (~2.4m) tall JVC letters, with a digital "zipper" announcing JVC Mobile's achievements and a globe! The globe measures 38 feet high by 63 feet (~11m H x 19.2m W) wide and glitters with more than 100 fibre optic points.